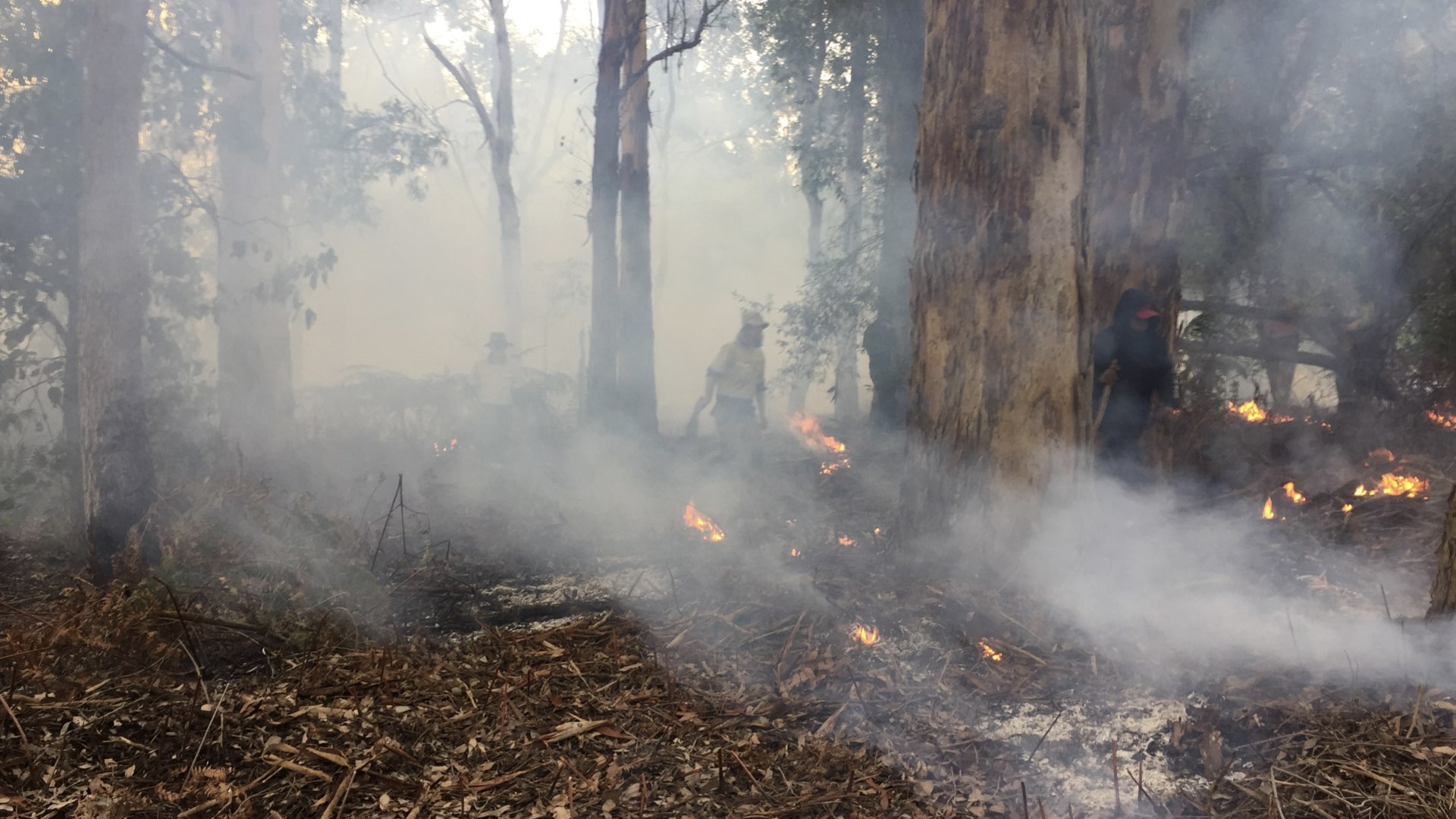 Fire has been an integral part of the Australian landscape for hundreds of thousands of years. Since the Europeans arrived in Australia there has been a dramatic shift in how the landscape has been managed and the role of fire.

Each major bush fire brings renewed calls for changing how we manage the landscape and a return to the burning regimes used by Aborigional peoples. The challenge is how to do this transition.

This article is the first part of a talk delivered by David Galloway at the 3 June 2021 Fire and Biodiversity workshop in Margaret River, Australia. It explores some of the cultural issues associated with the language we use and the meanings we carry into the discussion about fire and biodiversity.

All respect to the Wadandi, the salt-water people, their ancestors and elders who have been on this seacoast for thousands and thousands of generations. Respect also to the members of the other Noongar groups who are visiting Wadandi country today.  Thank you for your graciousness in having us here, and for your extreme patience while we of European ancestry learn to listen to you, connect with this country, and do things a whole lot better that we have in the past.

How we use language and the meaning behind what we say  has a major impact on how we view the world and what we do. This article, the first of two, will present seven clichés or tropes that are circulating around the Fire and Biodiversity discussion. The second article will present directions to start thinking about a new way forward.

When faced with a complex problem people often want simple solutions, like the silver bullet that will kill the werewolf. Or they want a magic fairy that will wave a wand and infinite resources will appear.

Some of examples of werewolves and magic fairies in the discussion about fire are….

Unfortunately we live in the real, complex world, and there is no such things as silver bullets or magic fairies.

One of the most significant shifts that occurred when the European’s arrived in Australia was the understanding of land ownership.

For Indigenous people, humans are part of the land.  This relationship is structured into a highly complex series of relationships that link culture, myth, landscape, ancestors, future generations, economics, language, the individual, the collective and ritual.

In contrast, for Europeans, land is a commodity owned by people. So looking at the south west region of Western Australia it’s all now “owned” by somebody, either:

Underpinning this is the assumption that if we own it, we can do what we like and the government will look after anything that is not ours.

To illustrate, someone from Perth recently  bought a semi-rural property in the coastal bushland around  Margaret River and told the local fire brigade that they had put up a 1.8m high fence to “protect their property”… but they would leave a key to the gate with the brigade so the brigade could get in and protect their house  for them if a fire came along. Clearly they had no understanding of how bushfires operate.

Fire does not respect our arbitrary ownership boundaries or private property rights.  If we want to use more sensitive approaches to fire we will require a much stronger commitment to the well-being of both the ecology of place and our neighbours.

Cliché 3 – Opinions are not the same as change

Change takes action and, unfortunately, we tend to be lazy. It’s easy to delude ourselves into believing that having strong opinions, expressing angst about the state of the world, attending a demo, or signing a petition is a major contribution.   It may help, but we can no longer afford the luxury of opinions.

But some people do go beyond expressing opinions and take action. So we salute the people who are creating change, like Nature Conservation Margaret River, the Gondwana Link, and activists such as the Nanna’s for Native Forests and the people like them, who have been speaking the truth to power for fifty years.

Cliché 4 – The Urgent is more Important than the Strategic

The Indigenous people saw and see fire as being part of life and a partner in managing the landscape.  This approach has been evolving for over fifty thousand years.  When looking at Indigenous origin stories it does not appear that there are many, if any, that talk about extreme or devastating fires. The majority of fire stories are about where fire came from, who could access it, who was sharing it and what it was good for.

In contrast, culturally, most Australians today see fire in the landscape as an anomaly, something to be feared and fought because it is immensely destructive.   This attitude can be linked back our European heritage where fire in the landscape was extremely rare and a thing that should be prevented.  Any idea about landscape fire was of apocalyptic and mythic proportions.

Whether it is the Norse legends of Ragnarok where the world is destroyed by fire, St John’s visions in the Bible of the world being burned in judgement, the Great Fire of London, the stories of bushfires in Australia, or even our rightful honouring of the heroic and brave firefighter that risk their lives to save people…

… from a European perspective landscape fire is seen universally as an extreme situation that demands extreme and heroic responses.

When this European framing of fire is linked to the belief that private property rights allows us quiet enjoyment of our patch and our taxes will pay for the government to look after us – we have a very challenging situation.

Consequently, we see huge resources devoted to fighting fires and protecting property, and it’s still not enough.  Our practices to reduce harm from fire have become increasingly constrained by policy and regulation aimed at enforcing minimum compliance to reduce the hazard, avoid litigation and protect life and economic assets.

However far, far, less is being devoted to developing and changing our relationship to fire in our landscape or working together on strategic interventions that will help people live with fire.

Cliché 5 – Is Biodiversity a Thing?

There are almost three million academic articles that try to define biodiversity. Quantative scientific studies talk about the number, and range, of species in one location – so it’s possible to have a highly biodiverse clump of weeds.

For other people it is the uplifting and evocative feelings they get when they go into a forest, even if there are only a relatively few species present.

Like “Love” and “Democracy”, “Biodiversity” is a high concept word that most people “get” at a feeling level, but when you drill down into what it means operationally, it’s really difficult.  For a working definition in the landscape, culture and fire discussion most people appear to think that biodiversity means a place that feels natural and healthy.  Some things come from this for Australia.

Firstly, for more than fifty thousand years both humans and fire were very real presences in the Australian landscape. Fire was part of daily life and did not appear to ever be seen as catastrophic.

Secondly, the European idea of ownership of the landscape that has been operating in Australia for the past two hundred years has resulted in a situation where things are now seriously out-of-whack.

Thirdly, we sense this out-of-whackness, and see the need for change even if we don’t know what to do and our current efforts are very clumsy.

Fourthly, we can unscramble the situation we have created and but are in desperate need of need innovation in this space, we can learn to burn better.

Lastly, given how things are currently we will still need the heroics because bushfire is real,  however it is possible to transition to the more gentle use of fire.

Cliche 6 – There are Not Enough Resources

The opinion holders are great at finding problems.

The reality is that there is no shortage of resources, it’s how they are accessed and used. It starts with people and their neighbours, in their locality:

The number of people and sophistication of the equipment in the volunteer bushfires brigades is significant. The firefighters are a really good at making fires and providing back up if our new efforts to burn better get a bit out of hand as we learn what to do.   And if there is a bush fire, they will be there to be heroic.

Also there are a whole lot of benefits for people in the conservation movement to get their hands dirty, get out on the fire rakes and open up around habitat logs and trees, do a bit of species recording, map the fire history and log the photographs to record change as the fire regime evolves.

Cliché 7 – There is no Leadership

There is lots of evidence from all around the world, people are building bridges between different groups, pulling together and focusing on their place.  Strangely, COVID has helped with this.  But we need the unimportant people who lack confidence to step up, reach across fences,  organise the gatherings and create a place to have these conversations.    And make these meetings fun and DEFINITELY not in a council office or using a formal structure.

The next article will be some suggestions about where to from here.